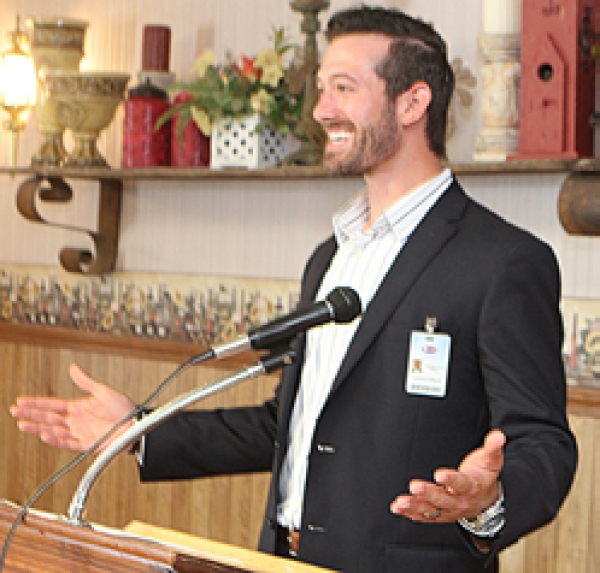 “The Wellness Center is kind of jammed packed,” Gillard said.

Moving the Wellness Center out of the hospital would give more room for the hospital’s physical therapy department, which continues to grow, Gillard said.

Local architect Brandon Gibson has drawn up plans to renovate the bowling alley as a Wellness Center. The hospital has also applied for a health innovations grant through Blue Cross Blue Shield to help pay for that renovation. If received, the grant would provide the hospital $100,000 a year for four years.

Gillard called the bowling alley “a pretty big task to remodel” because of how it’s set up. “We were surprised by the demolition cost,” Gillard said. “The bowling alley is structured in three different levels and it’s all in concrete.“

But the task isn’t impossible, Gillard said. “ We would have to build up some levels and bring some stuff up to date, so it’s a little more pricey than we thought it would be,” he said. “We thought we could just go in and gut it and rip it out, but not so much. It’s never that easy.”

What makes the site attractive is that it “might be utilized more for the younger generation that might not want to come into the hospital for the wellness center.”

The reason contracts have dug out dirt from under the old entrance of the hospital after demolishing it and bringing in new dirt is because the dirt that’s there wouldn’t make a good base for the future expansion, Gillard explained.

“You might have seen a large hole,” Gillard said. “The dirt that was underneath that building contained a lot of clay. So we had to bring in new, which Oetinger & Lloyd is bringing, about 16 inches of dirt that doesn’t contract or expand. Because the last thing we want to do is put a 29,000 square-foot concrete pad on dirt that’s going to contract and expand and then break up over the next several years.”

The project has completely removed the old obstetric/birthing unit as well as the main entrance. Gillard said he appreciates the Clay County Museum moving out as quickly as they could to make way for the expansion.

Gillard said of the three bid packages for the hospital expansion, he and the hospital board have approved the first two, both of which came in under budget. The project is estimated at about $16 million.

“So we’re hoping the third bid package will come in at budget or under budget,” Gillard said. “There’s a lot of construction going on in Salina, Topeka and Manhattan, so there’s a lot of large contractors already in the region. We’re just feeding off of that, so we’re very fortunate at our location and to continue to get great bids with big construction companies, electricians, plumbers, sheet rock businesses and painters. Things are going really well with the construction project.”

Gillard also announced the Clay County Hospital is about 75 percent to their goal and has raised $1.5 million for fixtures, equipment and furnishings for the expansion.

“We’d like to tell you thank and the community thank you for all of your support,” Gillard said.

Clay County Medical Center is also fortunate to see growth in outpatient clinics, which includes all of the hospital’s specialists from orthopedists to dermatologists.

Most recently, the hospital brought in a new ophthalmologist, Dr. William Witt, based out of Manhattan. Witt sees about 10 to 12 patients a month at CCMC and focuses mainly on cataract procedures.

“It’s great to have Dr. Witt at our facility instead of our patients driving down to Manhattan for those services,” Gillard said. “They have it right here at our facility.”

The hospital also recruited another dermatologist, Dr. Majdy Albahhar, also out of Manhattan, and a podiatrist, Michael Frederiksen, of Salina. A second dermatologist and another podiatrist gives patients an option, Gillard said. Dr. Frederiksen also does small foot and ankle surgeries at the hospital.

“We just continue to grow services at the facility,” Gillard said. “That’s really the goal. How do we keep services here in Clay Center ... instead of going to Manhattan or Salina?”

“It’s nice to see that they’re willing to not to look at all the dollars all the time and to focus on service the community here and serving the patients here in Clay Center and Clay County to do those procedures right at our hospital,” Gillard said.

Gillard is also working with the Cancer Center of Kansas to bring in another oncologist. Currently a doctor comes in from Salina Regional Center to treat cancer patients , but the hospital would like to bring in a second oncologist and provide chemo services at the hospital. The intent is to keep those patients from having to travel an hour or so to receive that treatment.

The walk-in clinic at the hospital also continues to see a lot of patients, Gillard said. The clinic is open in the evenings from 5 to 7 and in the morning from 8 to noon on Saturdays and Sunday afternoons from 1 to 3 p.m.

“I continue to be impressed with the numbers we’re seeing on that walk-in clinic,” Gillard said. “I was thinking we might see 50 a month on average, and now we’re seeing anywhere from 160 to 180 patients.”

The walk-in clinic patients come in from all over, including neighboring towns and counties, and even some from communities that have another hospital nearby.

“They’re traveling from all over to come to this walk-in clinic because it’s a lot cheaper to take your loved one to a walk-in clinic for a $100 or $150 instead of an ER visit ($600 to $800). And in a lot of these towns, that’s all they have is the ER on the weekends and evenings.”

Not only do patients prefer it, but so do insurance companies, Gillard said.